That a formerly war-torn region like Kosovo would outrank the U.S. and U.K on any measure of perceived safety is just one of the surprises found in Gallup’s annual Global Law and Order report. The 2018 report, which included findings from more than 148,000 interviews with adults in 142 countries and areas, provides a valuable measure of people’s sense of personal security and their experiences with crime and law enforcement.

According to the report’s authors, “Gallup sees strong relationships between people’s answers to questions about their own security and their own experiences with crime and law enforcement and external measures related to economic and social development. These relationships illustrate how high crime rates can often suppress social cohesion and negatively affect economic performance.”

While measures of economic and social development are valuable, the findings have a more immediate impact on travelers. As we explored in our review of Aon’s 2018 Political Risk Maps report, formerly safe havens around the world are becoming less and less secure. Gallup’s report adds color to this picture; an understanding of how secure locals feel provides useful context for those traveling in these regions.

Gallup translates participants’ responses into a Law and Order Index score, which provides a measure of the percent of the local population who feel safe.

Among the 10 top ranking countries, they found some usual suspects, with Singapore holding onto the top spot from 2017. Algeria, Turkmenistan and Jordan slipped off the top 10 list, as did Vietnam, which was not surveyed in 2017. They were replaced by Hong Kong, Indonesia, and Canada. Egypt jumped 31 places over its 2016 position (+8 points) to join, along with China in its first year of being surveyed, in the 6-way tie to share the last spot of the top 10.

It shouldn’t come as a surprise that Venezuela retained its place at the bottom of the list in this year’s report. Afghanistan and Mexico saw their rankings fall substantially to add them to the lowest tier, reflecting the widely-reported violence and declining stability in both countries. Four nations rose off the lowest end of last year’s rankings, most notably Central African Republic and El Salvador, improving by +7 points and climbing 25 spots and 13 points for 26 places in 2017, respectively. 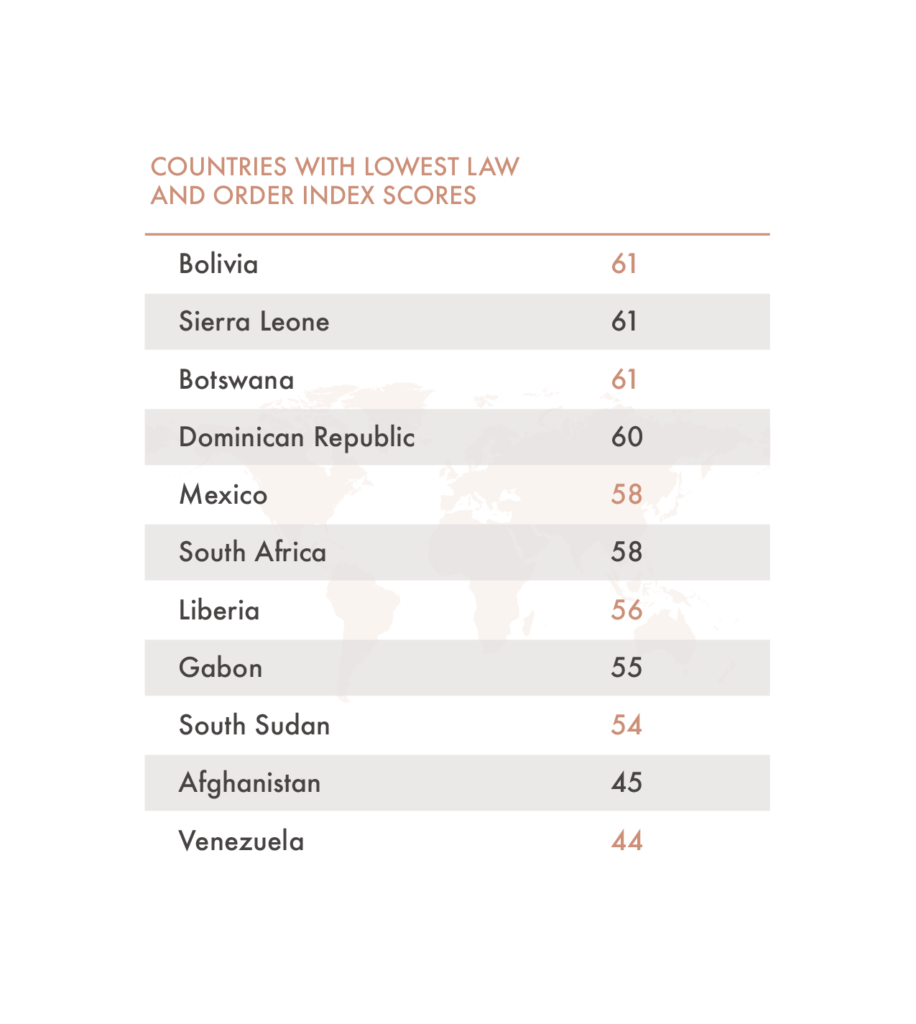 Overall, the report claims, most people feel secure. “More than two in every three people worldwide say they have confidence in their local police (69%) and feel safe walking alone at night where they live (68%). One in eight (13%) say they had property stolen from them or another household member in the past year, and 5% say they were assaulted or mugged.”

As you might expect, the degree to which people feel safe fluctuates by region. But it’s worth noting that the largest swings in reported safety perceptions were year-over-year improvements:

How to Handle Low (and Declining) Index Score Areas

Gallup’s findings—that the majority of the world feels secure and confident in its local policing—are reassuring. The 2018 report finds more regional improvements than it does declines and the lowest score increased by two points, narrowing the total range of scores by 4%.

That said, specific countries and regions have become riskier, and travelers and their support teams should take note. Afghanistan offers an extreme—though, unfortunately, not surprising—example, where “the percentage of Afghans who say they feel safe walking alone at night dropped to a record-low 20% in 2017 from 36% the previous year.”

Even Mexico and Russia, which have in recent history become more common destinations for business and leisure travelers, saw their scores drop 7 and 4 points in the past year, respectively.

The most important takeaway from Gallup’s study, we believe, is to observe these trends and, more specifically, which countries are moving in the wrong direction.

As risk increases, preparedness, ready backup plans, local contacts, and situational awareness become more imperative, both for travelers and travel planners. Understanding the real risk posed by different destinations relative to common perceptions is the key to using these and other tools in order to react appropriately.

How might Gallup’s Law and Order Index scores help with your executive travel planning? Leave us a note below sharing your thoughts.

Savoya’s longest tenured employee next to founder Robert Dobrient, Ms. Gleason currently serves as Savoya’s Chief Operating Officer. As a thought leader in the travel industry, she shares high-level insight into research, trends and other new developments affecting the space.