New York City has found itself in the midst of a crippling traffic problem that is reportedly costing the city billions in operating costs. This excess traffic frustrates everyone. But for executives who must navigate the city to do business, it isn’t just a hassle—it carries the financial impact of lost productivity as well.

Of course, congestion has always been a hallmark of New York City life, but a spate of recent studies suggest that the problem is worsening at an alarming rate.

What the Data Shows

The transportation data analytics company INRIX released its Global Traffic Scorecard in February of 2017, ranking vehicular congestion around the world. Out of the 1,364 cities it analyzed, INRIX found New York City to be the 3rd most congested city in the world behind Los Angeles and Moscow.

The causes of this congestion? The usual suspects: high concentration of businesses and, therefore, commuters, limited space for road improvements, an ever-increasing population density, and a massive flood of ride-share vehicles competing with traditional taxis.

The limited space is no joke. New York City is the most populous city in the United States with over 8.5 million people (more than double Los Angeles’ nearly 4 million) and with much less space to fit them – 304 square miles as opposed to 503 in Los Angeles. Manhattan, where the majority of New York City’s executive ground transportation takes place, swells to over 3.9 million people during business days, 170,000 per square mile.

But New York City has always been known for its high population density and logistical transportation challenges. What makes the current road congestion so different?

In October 2016, the NYC Department of Transportation released its Mobility Report, analyzing traffic trends in the city. The study found the average speed of travel in Manhattan south of 60th St dropped 20% to a breakneck 8.21 mph between the years 2012 and 2015. Speeds in midtown have dropped to just 4.7 mph, a speed hardly better than using your own two feet.

The DOT also found that for hire vehicles (FHVs)—consisting of taxis, Uber, Lyft, professional black cars and related providers—saw a 50% increase in rides across those same years. Out of the myriad vehicle types included in the FHV category, statistics seem to single out ride-sharing vehicles as the main culprit for the increased congestion. The chart below from Statista shows the recent meteoric rise in ride-share demand, which took off in 2014, despite Uber’s launch in New York in 2011: 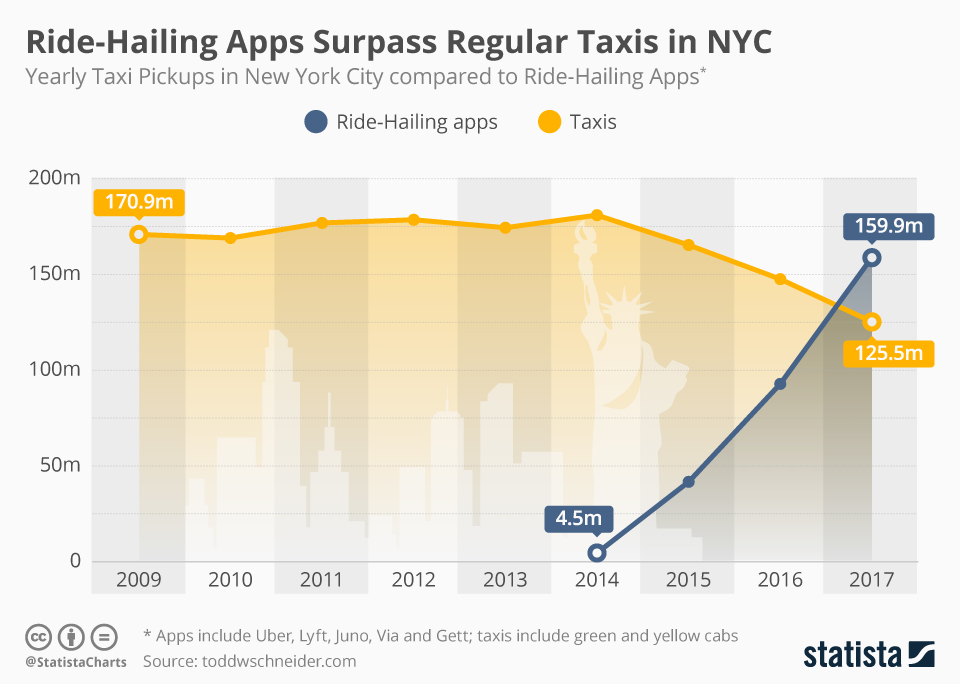 Notice that taxi demand did not decrease at the same rate ride-sharing increased over the same time period, suggesting that there is massive demand for FHVs in general, of which ride-share is a large part. Pairing this with reports that ridership of the New York City subways has been declining over recent years, it seems likely that travelers are turning to ride-shares to avoid having to use the notoriously run-down subway system.

Projections seem to suggest that the situation will not get any better any time soon on its own. The estimated $33.7 billion a year that congestion costs the city is becoming increasingly difficult for city officials to ignore.

In January 2018, a proposal created by a congestion task force formed by Governor Andrew Cuomo recommended a “pay-to-drive” method that would charge drivers a toll for going south of 60th St.

Lawmakers hoped that, similar to plans instituted in London, Stockholm and Milan, this fee would disincentivize drivers from entering the most congested parts of the city, while at the same time collecting revenue to directly fund public transportation improvements. A pared down version of this recommendation—a provision which levies a surcharge only on FHV’s entering the zone south of 96th Street—was finally passed in March as a part of New York’s 2019 state budget.

The 2019 surcharge on FHVs will likely affect ride-share drivers the most, as the overarching aim of the fee is to nudge the most cost-conscious consumers into using public transportation, rather than clogging the streets with their ride-shares. This is great news for executive ground drivers and their clientele, as a decrease in ride-share congestion—which the research cited above suggests is the leading cause of the ongoing congestion problem—means clearer roads on which to operate.

However, this alone won’t resolve the challenges faced by executives who need to navigate the city. To continue delivering the high level of service expected by executive travelers, our drivers report that a number of “on the ground” solutions are needed as well.

One aspect that many travelers enjoy about ride-sharing services—the ability to summon a car at the drop of a hat—is actually a weakness for busy executives, whose tight schedules don’t allow for deviations. For these clients, the conditions of the road mean little. The importance of arriving to a location smoothly and on time means everything.

When prearranged executive transportation is booked, the driver is able to view the itinerary well in advance of the trip and prepare a game plan.

For example, they can make note of a building’s access points, look for possible places to park or note any planned road closures due to protests or marathon routes. Then, with all this information, they can develop a proactive strategy for managing these issues before they arrive onsite, compared to ride-share drivers who must react to changing conditions in the moment.

Many of the issues facing drivers on the streets of Manhattan—parking restrictions, unpredictable traffic, construction, traffic officials and unexpected road closures—are largely out of drivers’ control.

Executive drivers may be able to plan ahead in order to mitigate their impact to some degree, but even the best-laid plans can often go awry. Despite their efforts to extensively prepare for their trips, the madness of the Manhattan streets is guaranteed to throw many unexpected challenges their way.

Road conditions fluctuate on a minute-by-minute basis—wrecks pop up, cars stall, and roads shut down. In these moments of uncertainty, top drivers turn to technology for help. The app Waze, for example, has become the standard navigation app among Savoya’s Certified Drivers. Its crowd-sourced reporting system allows drivers to see various upcoming hazards before they reach them and adjust their route if trouble arises.

This feature can go a long way in helping a driver avoid several of those more avoidable issues listed above, though some difficulties are more systemic and cannot be solved by an app.

Many of our NYC drivers report that one of the biggest challenges they face is parking. Many of the locations that executives frequent for meetings—those scores of Fortune 500 companies housed in the Financial District, for instance—have little to no available parking. Drivers attempting to pick up at some of these buildings may be forced to circle the block or double-park until their passenger is ready.

Drivers who are unable to find a conspicuous parking spot for their pickup are faced with a difficult decision. If they move, they find themselves having to circle the block or park in a remote location where they won’t be visible to the traveler. Yet, if they remain, they may be ticketed. Traffic officials have a heavy presence in the busiest locations and will often issue an immediate $115 ticket for an infraction.

Positioning for pickups at major hotels is often no better. Most hotels have a cleared zone on the front curb reserved for pickups and drop-offs. But unless a driver is immediately loading or unloading their passenger, they are forced to reposition to a location where they can find parking while they wait for their passenger.

In these instances, drivers will often check in with the doormen upon arrival, but then have to trust that the doormen will call them when the traveler comes out—effectively leaving the successful connection between car and passenger out of their hands.

For this reason, drivers’ relationships with doormen often play a vital role in ensuring a smooth pickup. Often, doorman will be much more likely to proactively help drivers find their passengers if they have a longstanding working relationship with that driver. Our drivers tell us that at common executive pick-up points—such as the Waldorf Astoria, the Four Seasons and the Plaza—it’s common practice for executive drivers to get to know the staff so that, when they arrive, they’re seen more as an extension of the hotel staff than a nuisance jamming their street.

As road conditions worsen and a steady stream of largely inexperienced ride-share drivers clog the roads, the need for experienced executive drivers has never been greater. Executive drivers who proactively attempt to mitigate these issues through advance preparations, new technology and the investment in building smart relationships are up for the challenge.

Have another tip for navigating New York traffic? Leave your suggestions in the comments below.